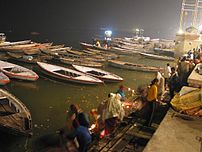 Image from WikipediaWell today I get lumbered with a crappy computer with more security restrictions than the Pentagon, 10 keys permanently stuck down, more annoying popups than party time at a cemetery full of zombies, too slow to allow me to upload files and a desktop picture displaying something you’d kill yourself before imagining your parents doing.

And still I provide you all with an update. I’m just too kind.

Yesterday evening we went for our boat trip along the river. It was fairly entertaining, and cheap at 80Rp. The “captain” (the guy with the big sticks that moved us around) told us a handful of facts about some of the buildings (“big building there – mental hospital”) and we parked up near a huge dance and music show taking place on one of the ghats.

It was quite grand, all bell ringing, incense burning and so on. Seven male dancers with a small stage each doing some ritual all in step with each other. I have no idea what it was about, but by the time they’d done the same thing three times it was about time to head back.

The main thing I’ve not mentioned yet is the main reason people come to Varanasi. Cremation. Being a major tributary sat on the Ganges, Varanasi is seen as a holy place and families pay a sizeable sum – around 3000 Rupees – to have relatives cremated on pyres by the side of the river in full public view. The bodies are wrapped in white cloth, often with a more decorative shroud on top, placed on carefully stacked wood and then more timber piled on top of them. The pyres are lit from one fire which is kept burning permanently. It takes 2 1/2 to 3 hours for cremation to complete and the cost of the funeral does depend on the type of wood used. Apparently it’s a rather exact science as wood is costly, so you need to know exactly how much you need to efficiently cremate a person of a given size and weight.

Of course, it also means that the dust falling from the sky while you’re eating your banana pancake on the rooftop cafe used to be Mrs Patel from round the corner.

In other news, I forgot to mention yesterday about the girl who came into the manager’s office while we were checking in. She was asking for a doctor for her boyfriend who had a problem with his belly. No, not sickness. A cow had gored him. It didn’t sound too bad from what she was saying, but he was worried that a rib may be cracked.

We were warned by the manager to watch out for the cows and bulls in the city. It’s hardly Pamplona, but many of the streets are narrow and bulls do get territorial. Besides, would you pick an argument with a creature maybe eight times your body weight that wanted to get somewhere with you standing in its way? I know I’d give it right of way. Or just run like hell.

My stomach’s been a little ropey the last couple of days, but nowhere near as bad as I’ve heard it can get. I’ve been getting a bit of a headache as well, so I’m putting it down more to either exhaustion/lack of sleep or a minor virus rather than the infamous Delhi Belly. Feeling better today, though.

I do have some updates planned for the blog, mainly streamlining the calendar/timeline down the side. The work’s all done on my laptop but I can’t find anywhere to upload the fruits of my labour at the moment.

On a final point, I’m overjoyed to welcome a new addition to the family back home – Taffy, the Schitzu. I knew it would only be a matter of time before my folks got another dog, and I’m sure they’ve not done it purely to convince me to fly back!

Well, we’re off for lunch now, and then to the train station for the trip back to Calcutta. It’s a “2AC” rather than a “sleeper” this time, so it should be slightly more comfy. We go straight to the airport from the train station, which will be the next possible place for an update. After that… Bangladesh!

3 thoughts on “Last bit on Varanasi”