The plan today was simply to chill and get a good night’s sleep before Aurelie took me around Kuwait city to see the limited sights. It’s not a huge place by any stretch and construction is underway all over, though certainly not on the scale of Dubai.

After a simple breakfast where Aurelie tried to make me eat three times more than I usually do, I was convinced to take a bottle of water (sensible woman) and we caught a taxi to the Kuwait Towers. These three spires are impressive despite their age. One is a simple spike, one has a globe halfway up containing up to one million gallons of water and the third has two spheres: a viewing platform in one and a restaurant in the other. We rode a swift elevator up to the viewing platform and had a wander round.

Unfortunately, again due to the sandstorm, the windows were somewhat gritty. I’d hate to be the guy who has to get out there and clean them. The upshot is that the view wasn’t as amazing as I’m sure it can be, and my photos aren’t great but they are good enough. Pictures on the wall show the damage done by the Iraqis when they invaded all those years ago. Going by the language used in the plaques, there’s no love lost between the nations. It does come as a surprise that the Iraqis didn’t destroy the towers completely, instead settling for a load of childish vandalism, but that’s pretty much what they did with the oil fields when they pulled out as well. 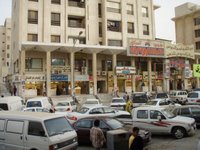 Back at ground level we hailed another cab and headed mall-wards for lunch. Another huge meal, this time Texas Fries. This is essentially a near-solid brick of chips, cheese and mincemeat with chilies. It’s delicious and stupidly filling – and on the menu as a starter.

We had a walk around the few shops that were open. Most of the trading kicks off around 4pm in Kuwait, so the majority were closed. To while away the time, we crossed to another mall for dessert at a French-style coffee shop. I had the most delicious berry pie and watched some men sweep away all the sand that was darkening the huge pool where a musical fountain features in the evening.

While in a supermarket picking up some groceries I heard a very familar accent and accosted a Geordie to ask where he was from. We exchanged a few words and he went on his way. We do get everywhere…

As the shops opened, we walked over to the older bazaar area. There are an amazing number of gold stores around there, all selling huge, chunky bracelets and necklaces. Definitely not something I’d buy, but there’s a huge market for it in Kuwait – all very bling. There must be four blocks where all the ground floor shops sell jewelery.

Evening was approaching and we caught a taxi back to the flat before Bob got in from work. It was when we got back that I discovered that my watch was an hour out. I have no idea if I didn’t change it when I landed or if the battery’s getting dodgy. As we’d returned comparatively late, I didn’t have time to jump in the pool but not to worry. There was always tomorrow and I had a lot to do online. I was fortunate to catch Noa on MSN and she gave me a ton of pointers on how to get to Israel and where to stay. I’m certainly looking forward to seeing her again in a few days to thank her for all her efforts!

Tonight I talked to my other US-based cousin before collapsing into my wonderfully comfy bed. Two nights in a row with a nice room. Top notch!