Now, I’m not as huge a fan of our feathered friends as I am of the rest of the animal kingdom. However, as it was so cheap to add this one extra park to yesterday’s ticket, it seemed daft not to include it in my itinerary so I paid up and made my way there today.

Again, public transport made the trip a (very cheap) doddle and I arrived at 10:40, missing the first Birds of Prey show of the day. The next was at 4pm and I wasn’t to make that one either as I left too early!

The Bird Park is larger than the Night Safari, but nowhere near as big as the Zoo. Still, I left just before 3pm and didn’t stop for lunch so it’s still a good half-day with my walking pace. Like the main zoo there are many places where you can walk in amongst the birds so there is no glass or wire between you and them. The prime example of this is probably the Lory Loft which is utterly huge and filled with the brightest-coloured Aussie birds you’ve ever seen. For a small fee (S$2 or S$5) you can collect a container of sugary liquid that sends these avians nuts and has then sat on your arm for feeding. Suspension bridges and half a forest complete this amazing attraction.

Not too far away is the Waterfall Aviary which includes the world’s largest man-made waterfall which towers at 30m in height. The whole exhibit looks like someone’s lifted a chunk of rain forest and dumped it indoors. Like the Lory Loft, it’s utterly enthralling if for slightly different architectural reasons.

Sadly, such is the nature of birds that many of them have to be caged which lessened the number of photographs I could (or would) take. Where possible I’ll not take a picture that shows an animal to be caged. Don’t ask why. I just don’t like to.

Outdoors, however, it’s amazing how many birds are in completely open enclosures and don’t disappear. Pelican, flamingo and numerous others I can’t recall the names off all live happily outdoors – even some parrots and maccaws.

The bird show I did get to see was impressive with some great aerobatics from the feathered performers. One vulture wasn’t playing, though. It was his first performance and he seemed to get stage fright! 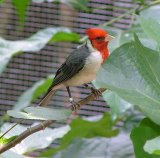 Near the entrance are a few Mynah birds and parrots which can speak surprisingly well. All of them have a list of words and phrases that can say. Coaxing them to do so is suprisingly easy!

Though I didn’t stay long enough to see the Birds of Prey show, I did get to see the stars as they’re housed near the park used for the demonstrations. Part of me wishes I had stayed on, but I would have been sat around for over an hour. Maybe next time!

I do have one less happy thing to say, and this goes for all three attractions. It’s nothing to do with them directly, in fact they’re doing their best to raise awareness of this and help out. It’s the staggeringly upsetting number of times you look at the information board for an animal and see the word “Endangered” written on it. Worse still is “critically endangered”. And even worse is that in every single case it’s our fault in some way or another. Deforestation. Hunting (for trade, meat, safety of humans). Poisoning. Environmental destruction due to global warming and the like.

This is where I’m glad we have zoos. It’s easy to tell people that these animals are struggling in countries far away. We can look at the TV and read books with pictures of them and go “aw”. But sit next to one, touch it, watch it perform feats that prove it’s not just a “dumb animal” and hopefully it’ll hit a little harder that we need to save every single one of these animals. The Zoo has two wonderful quotes on large boards as you exit the Fragile Forest exhibit:

If all the beasts were gone,
man would die from great loneliness of spirit,
For whatever happens to the beasts
also happend to man
All things are connected.
Whatever befalls the Earth
befalls the sons of the Earth.
Chief Seattle of the Suquamish & Duwamish, 1855

The forest is a peculiar organism
of unlimited kindless and
benevolence, that makes no
demands for sustenance and
extends generously the products
of its activity; it affords
protection to all beings,
offering shade even to the
axeman who destroys it.
Lord Buddha, 500BC

Right, I’m off for a McDonald’s. Purely to see if they do indeed have free wireless as I’ve been told.

[update – sat outside McD’s and I have a 4-bar wireless connection. Wicked!]