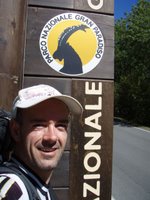 Well, this morning’s task was to get across some big hills in the Gran Paradiso National Park. Andrea had given me an old map, which was a huge help, and I made it to the borders of the parkland by 9:30am. By 12:30 I was sat having lunch in Valprato Soana at an elevation of 1113m. Cold pizza, a pastry and Coke were all I could get, but it filled a gap.

I stopped at a tourist information shack and was told that the route I’d picked wasn’t difficult and that I should be in my targetted destination (Lillez) by 8pm at the latest. In a word: ha! 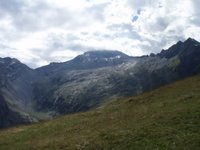 The path to the start of the hiking trail was fine, but the trail itself was incredibly steep and it took over an hour to reach the first plateau. Markings there were sparse, but thankfully some people were building a house there and managed to point me in the right direction.

I moved upwards into a stunning valley and pointed myself at what I thought was the pass through the mountains. Then I noticed the red and white markings led to my right… and upwards. Ever upwards. That’s when I realised I’d barely reached half the height I had to climb to get through the pass.

The higher I got, the worse it got. Shale, pebbles, mud, snow… I did get a magnificent view of some chamoix perched on a ledge above me, staring inquisitively as they do. 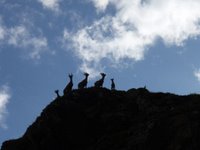 Finally, maybe two hours later than planned or intended (or recommended, for that matter), I reached the summit having made full use of the chains bolted to the rock face. A large bell awaited me and I rang it like bonkers, overjoyed at getting to the top. But it wasn’t over yet… The downward slope was as good as unmarked and quite heavily covered in snow with loose rocks underneath.

I eventually made it down with my boots filled with stones. I had to slide down some steep grassy banks as I couldn’t find anything remotely resembling a trail down. Eventually I located a path to a sign marked “Lillaz – 1671m”. One mile! Yes!

An hour later I was still walking and beginning to wonder what was going on. I got to another sign: “Lillaz – 1671m”. It’s not the distance… it’s the elevation. By luck I bumped into a park guide who told me I had one to one-and-a-half hours still to go to get to Lillaz. I was battling against daylight as the sun was already going down and I wasn’t carrying any food. I had to get there. 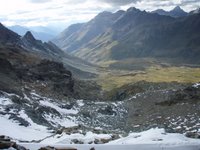 I finally entered Lillaz around 21:30 and got camped up in a campsite. Lots of people speak French in Lillaz, but not a lot of English. I started to polish the language I’d been taught at school to pay for my camping and to buy some food. Setting up camp cost me EURO9 (4 for the tent and 5 for me, myself) and then I discovered it was an extra EURO1.5 for a shower! So I didn’t bother. Had I realised, I’d have camped in the woods round the back where it’s free.

Dinner consisted of one beer and two crepes – one with Nutella and one with Grand Marnier to help knock me out.