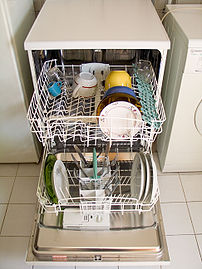 My last morning in Chamonix was… eventful. Actually, one of the busiest working mornings I’ve had in a while. I was late into the office as I had to hand back the apartment to the people we’d rented it from. They were expecting Sophie, who handles the contracts, but had to deal with me instead. I was up till silly o’ clock tidying the place and my reward was a handful of snide remarks and comments about getting cleaners in at our expense to tidy it.

If it wasn’t for the fact that I know so many nice French people, this is the kind of attitude that would put me right off them. The floor was a mess, sure – but the vacuum I’d been provided with was less sucky than an asthmatic granny after a 10-mile run. I’d forgotten to wash a handful of spoons. I somehow think that claiming this warrants a â‚¬20 cleaning bill is a little out of perspective given there’s a dishwasher in the apartment and I’ve left behind half a tub of cleaning crystals for it.

Frankly, I expect them to do the job themselves and then bill the company. The stories I’ve heard about some of the people we lease from does make one jump to the conclusion that they’re all out to rip you off.

Anyway, I made it to the office in good time and had the last of my luggage with me. As I said, I used every trick I knew of to get all my luggage packed. This included tying my trainers and my boarding goggles to the carry-handle of my day-bag as they wouldn’t fit in my rucksack. Technically one piece of luggage and I got away with it, so I’m not complaining.

Nat kindly drove myself and one of the Chris’s to Geneva Airport. Chris had a 3-hour wait as we had to get there in time for my flight, but there wasn’t enough time to do two separate airport runs. My apologies for that.

The auto check-in involved some detective work as I didn’t have my booking reference to hand. Or the postcode of the British office, which was an alternative detail asked for. I did have the name of the person who booked the ticket… but it wasn’t their name used on the actual booking. I eventually sussed it as being the initial of the first word of our company name, and the second word in full – like “S Removals” as the booker on behalf of “Smith’s Removals”.

Luggage tagged, I handed my rucksack in (“Be careful of the weight next time” as it tipped the scales a whopping 1.6kg over the limit) and wandered through the boarding pass check and security in search of duty free for my mum. Only I didn’t find any. Aside from some small refreshment areas, all the shops in Geneva Airport are actually before the area where they check your boarding pass. Which is weird. I can only assume that if you buy something then they check your ticket at the till to see if you’re leaving the country. Seems a little weird, given that you could buy a budget ticket and a vast amount of duty free to outweigh the cost. Regardless, certainly if you’re heading for any of the “B” gates, there are no duty free shops past security so be aware.

My flight had a 40 minute delay in taking off, but arrived in Edinburgh earlier than that airport was claiming – an hour earlier, in fact.Â  I think they were advertising the times based on those in Switzerland, that is one hour ahead. Either way, my dad was expecting a long wait and had barely arrived at the arrivals area when I walked out.

It was nice to have some proper British grub for a change. Stew, spuds, carrots… A cup of tea and some cake afterwards. Two bouncy dogs going mad at my feet and a ton of mail to sort out.